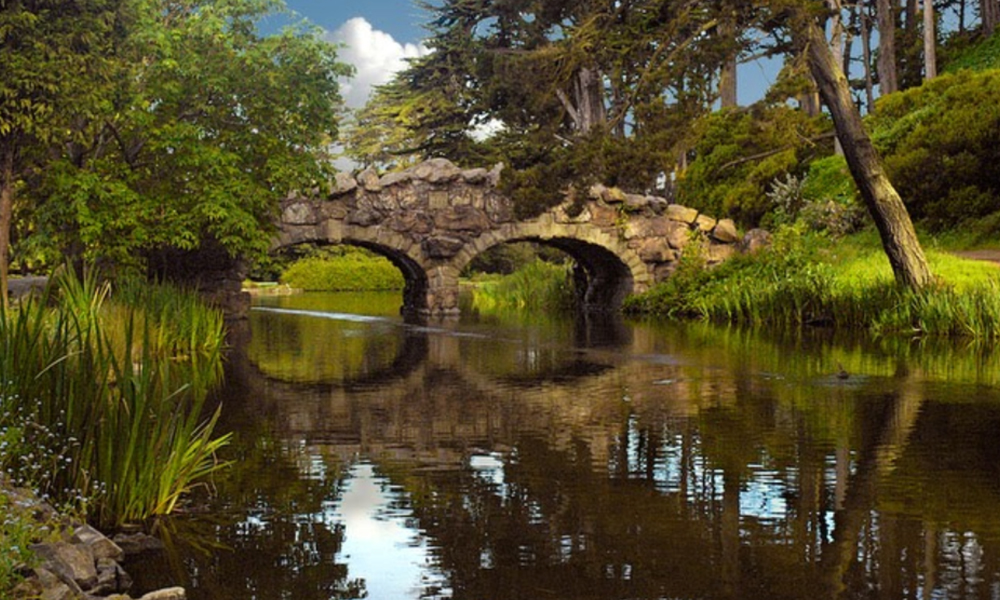 I was walking by Dolores Park the other day and it was packed. Not Hunky Jesus Competition packed but it was still a little too crowded for the city’s first Not-Getting-Coronavirus Competition. I thought we wanted to keep that one from going annual… Look, I don’t want to publicly shame anyone in the cannabis nation (so I blurred everyone in this photo except for the three white guys hugging in tank tops)

And I’m also not here to yuck your yum. But when your yum becomes a matter of yuck or death for me, I’m going to write a blog post about it.

Even thru the cracked camera lens of my iPhone 7, it’s impossible to miss that San Francisco is one of the most beautiful cities in the world. It’s definitely one of the best places to hang outside with friends and flirt with cute strangers in a park. But right now, hanging out in a park with friends or doing anything with a cute stranger is a bit like drinking Lysol; it’s an idea, just not a good one.

If you are open to venturing more than 6 feet beyond the blankets of Dolores Park and exercising more than just responsible citizen behavior, here is a list of the 7 best places in San Francisco to get high alone. While you can’t technically smoke in all these places, you can certainly eat marijuana before you leave the house. And/or pair your lunch with a refreshing cannabis drink. And/or dab your favorite cannabis concentrate for dessert. And/or just throw a cannabis oil vape pen with a chocolatey terpene profile in your pocket and get out of the damn house. There are many ways to get marijuana into your endocannabinoid system but there are only 7 best places in San Francisco to get high alone.

Sometimes it’s just a fact that you have to get really high to be alone. Rising over 900 feet above the geographical center of the city, the dual tips of Twin Peaks offer unparalleled views of San Francisco’s unique urban sprawl. Under Spanish rule the peaks were called “Los Pechos de la Chola” which, honestly, I’m not going to translate because the name hasn’t aged well. They are now called “Noe” and “Eureka” respectively because when you climb to the top and see the whole peninsula from bay to beach, there will be “Noe” denying that you are having a “Eureka” moment. Okay, that’s not true…but it’s not not true.

Pro tip: Light your joint before you get to the top of the peaks because the force of the wind can be thrilling but truly impossible for any flame.

Jack Early Park is San Francisco’s smallest public park. The entire park is a secluded staircase leading to a viewing platform made for one. Maybe two, but you’ll have to get real close and comfy, which kind of defeats the purpose of this whole dang post. Jack Early was a resident of Telegraph Hill who planted a few trees on a rocky outcropping in his neighborhood one sunny day in 1962. He then built a narrow staircase out of old railroad ties and waited 25 years for the city to name the whole to-do after him. His success proves the old adage: If you want a park named after you, you have to plant a few trees first. Then build a staircase.

I came upon this park one evening while wandering the northeast corner of the city. As a well-known sucker for an ascending staircase, I couldn’t resist. Fifteen seconds later I found that this mystery case led to a surprising open space, with beautiful views of both the Golden Gate and Bay Bridge. Two big bridges, one tiny park. What a deal. Alcatraz also sits at the center of your vision, for those of you who think home is the worst place to be confined for long stretches of time.

Pro tip: I’m not kidding, the park is quite small. If this blog post creates a rush, wait your dang turn.

The exact opposite of everything that is Jack Early Park, Golden Gate Park is a massive sprawling space literally built by the Grateful Dead so they could get stoned and not talk to anyone. While the Grateful Dead did not build the park they, and every other legend of San Francisco, have definitely gotten stoned in it. The Park, which just turned 150 years old, is arguably the city’s most important piece of nature and with the shut-down still in effect, it likely won’t be this clean for another century. Utilize that one benefit, while it lasts!

Pro tip: This is probably the best space on the list to just get real Indica-ed out and talk to the ducks and Bison and any other animals down to chat that aren’t carriers of Covid.

4. The Outdoor Labyrinth at Grace Cathedral 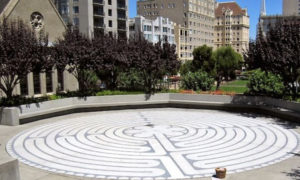 If you’re anything like me, standing still and thinking about stuff makes you anxious. Especially if you consumed a particularly loud Sativa. Sometimes you just gotta move to calm down. You also likely have ADHD. Before the Divine-innovation of Adderall, monks and mystics alike cured their focus issues and calmed their Sativa scaries with walking meditations along elaborately twisted paths etched into stone floors. These labyrinths still exist today and Grace Cathedral at the top of Nob Hill is home to two, one inside the church and another in its courtyard. Though the labyrinths are identical, the one in the courtyard is better because it is outdoors. CDC guidelines specifically state that outdoor labyrinths are safer than indoor labyrinths.

Pro tip: The courtyard labyrinth is accessible 24/7 and Nob Hill is quite lovely during the quiet of night. At that hour it’ll just be high you and The Most High, Him/Her/They.

What is San Francisco most famous for? Say it with me now. 1…2…3…Microclimates! Thanks to the peninsula’s hilly topography and cooling ocean currents, the weather patterns here change by neighborhood. If you’ve spent more than a few minutes in the city you know that the weather changes more than a diva in concert. You can get up to eight different lewks in two hours. If sunshine on your face is the look you crave, take a walk through San Francisco’s “Sun Belt,” a section of the city comprising large parts of the Mission and Potrero Hill. I recommend ending-up at The Permaculture Garden at 18th and Rhode Island. The garden is about as big as the state of Rhode Island, completely unfenced and, unlike Rhode Island, open to the public year-round. Its website says it was built as a “regenerative food forest demonstration site” – which I think means “garden” – and calls it one of the best-kept secrets in San Francisco. Thanks to the popularity of this blog, I’m sure it will stay that way for a long time.

Pro tip: Bring a heavy sweatshirt as you’ll likely have to traverse the Fog Belt on your way back home.

If I’ve said it once, I’ve said it a thousand times: lesbians are the best. It’s little wonder the most community-inclined of all the orientations helped to create the quaintest little village in all of San Francisco. Respect the neighborhood vibe and consume your products before winding your way up through the well-preserved bungalows above Cortland Ave and into the wildflower patches of the summit park. The top of Bernal is easily my favorite peak within the city limits. It’s a wide-open space with swirling 360-views and there’s a massive outcropping jutting from the main peak which seems like it was designed for cinematic twirling. It’s possible we will have to skip this year’s Sound of Music Sing-A-Long at the Castro Theater so maybe throw on your best hausfrau frock and head up to Bernal for that IRL #MariaMoment.

When it comes down to it, the outside world is still pretty uncertain right now. Not that I’ve ever been an advocate of abstinence when it comes to ANYTHING, but there is currently a certain resonance to its central argument of non-engagement. And, let’s be real, your couch is a pretty awesome place. It’s got tv, it’s got movies, it’s got food, it’s got blankets, it’s got text, it’s got Zoom, it’s got windows to look out, it’s got money somewhere in it probably, it’s got porn, it’s got weed…it’s a pretty awesome place. And for the first time in history, you are a hero for sitting on it and getting high. This is our Blitz, so get blitzed. Responsibly.

Pro tip: The legal state limit on edibles is 1000mg. That should do the trick.

« How to Use a Cannabis Oil Vape Pen
Supporting the Cannabis Ecosystem: Buy Local at CSCC »